This is the first war in my lifetime that war is taking place in towns and streets where I've been. I taught many times in Russia, Crimea and Ukraine. I  know dear and wonderful people there. I feel powerless to do something. I made sunflowers to give away, I made a heart wall hanging in Ukrainian flag colors to hang in our sanctuary. I pray, of course, and I weep. What more can I do? 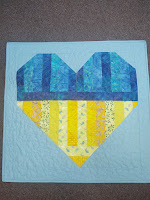 I hear all sorts of assorted points of view:

Zelensky was a comedian. I say Reagan was an actor. I say people sometimes rise to the occasion and surprise you.

There is corruption in Ukraine. Show me a place without corruption, including here.

Wars have always gone on. I say, maybe they don't have to go on, if we rise to the occasion.

Zelensky is a thug. I say he is staying put and courageously leading his people by example.

Zelensky is a Nazi. I say he is a Jew, how ignorant can one be to call him a Nazi?

Putin wants to reunite the old Soviet Union. I say we all want a lot of things. Wanting does not mean we can or should get everything we want. I say he has no right to take someone else's country. They don't want to be reunited. They remember how it was under Soviet domination.

Putin says he is not targeting civilians. I say, I can see otherwise with my own eyes.

Yes, we can give money to some worthy group trying to alleviate the agony.

The bigger question is - Is there a way to stop this madness? Maybe not. The propaganda (talk about fake news) spewing in Russia includes - we have to do this as the West wants to wipe Russia off the face of the earth! The Ukrainians want us to liberate them! Only a few of our soldiers have died. And so forth.

Here, we have a leader who is beholden to Ukraine, Russia and China because he and his family have made a huge amount of money from them. And he is not alone in this. Never mind we promised Ukraine we would protect them if they gave up their nukes - integrity anyone? The bully of the East is threatening nuclear war if we do this or that. No one knows if he is bluffing, and so they are timid. The play yard bully is hard to deal with, especially when he wields nukes. We notice his tanks are not very good. We don't know if he actually has nukes that would work. They could be rusty as much of the country is rusty. But we don't know. Where is the intelligence informing our leaders? Is it whispering things unfit for citizens' ears?
There does not at this moment seem to be a possible winner in this mess. Everyone loses. All I can do is pray.

Oh Divine Presence, hear the cries of Your people. We see the atrocious war, and we don't understand. We see two "Christian" countries acting the opposite of Christ. We are dismayed. I don't think this has a human solution.  Blanket the world with Your Peace. Fill hearts and minds with Your Holy Spirit. May Your Highest Good come forth and bring Peace. We ask this in the name of Christ, and we seal it with the ancient seal of faith, Amen, Amen and Amen